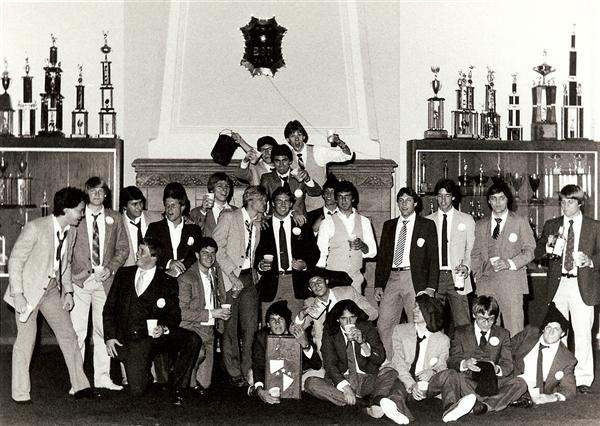 A charter was granted by the Put-in-Bay convention on July 18, 1903 to twelve petitioners. On September 26, 1903, nine students signed an agreement with the Purdue faculty under which a chapter was to be permitted. On October 27, 1903 the chapter was installed by Betas from DePauw and Indiana, among them: Lewis Terrell DePauw ’04, Roy Shackleton Indiana ’05, and Harry H. Baugh Indiana ’06. The name Beta Mu was given to the new chapter. Purdue is the sixth Hoosier chapter of Beta Theta Pi, not the fifth, as one might suspect, for we had a chapter at Northwestern Christian University, now Butler, from 1878 through 1881. Purdue is the 88th chapter of the fraternity. Purdue first had a chapter house in the college year, 1910-1911. The present house was dedicated on April 9, 1927. On January 29, 1912 the Purdue chapter adopted its chapter coat-of-arms. In addition the fraternity’s coat-of-arms, the chapter has added a gear wheel, and on the scroll our motto: Machinery is King.