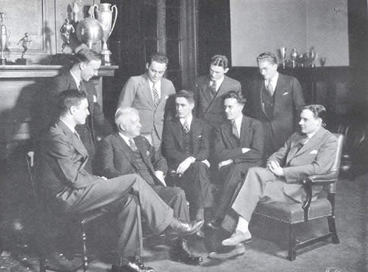 The Founding of Beta Theta Pi

At nine o’clock on the evening of the eighth day of the eighth month of the year 1839, eight earnest young men, all students at Miami University, held the first meeting of Beta Theta Pi in the Hall of the Union Literary Society, an upper room in the old college building (known as “Old Main”). The eight founders in the order in which their names appear in the minutes were:

In addition to a roll of honor that includes some of North America’s foremost industry leaders, Beta Theta Pi is known for its entrepreneurial spirit, including recognition as the “Pioneering Fraternity” and “Leadership Fraternity.” The Fraternity is proud of its “Beta Firsts:”

To develop men of principle for a principled life.

To build lasting bonds of friendship and brotherhood, Beta calls for: